The New Green project is a contemporary myth, based on an older myth from medieval period.

The project concerns the establishment of a fiction company called The New Green, which presents a new global trend regarding the natural landscape that imposes Blue as The New Green and suggests its replacement. A company that is the first worldwide to discover a formula that converts the green color found in nature into blue. TNG creates imaginary gardens all around the world, at the most significant monuments and sites, by utilizing the plant-based blue pigment and bringing it back to its natural habitat.

Instructions: How to become a tree is an installation comprised of 20 sculptures, placed high on the trees.The sculptures are the official gardeners’ gloves of The New Green’s specialists that hold the blue flowers. The work is based on the novel by the German philosopher Novalis and his notes about the continuation of the novel, (Novalis passed before finish it at the age of 29), in which the author places Heinrich in a landscape where he finally finds the blue flower and at the moment he cuts it, the flower is transformed into the only girl that he loved, she dies and the flower becomes, a stone and finally finishes as a tree.

An allegory that concludes Heinrich’s novel and creates the ideal place that the young boy never encountered, thus assigning to the park the dimensions and significance of a paradoxical destination by which visitors can either encounter or be encountered. 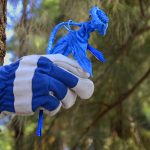 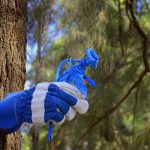